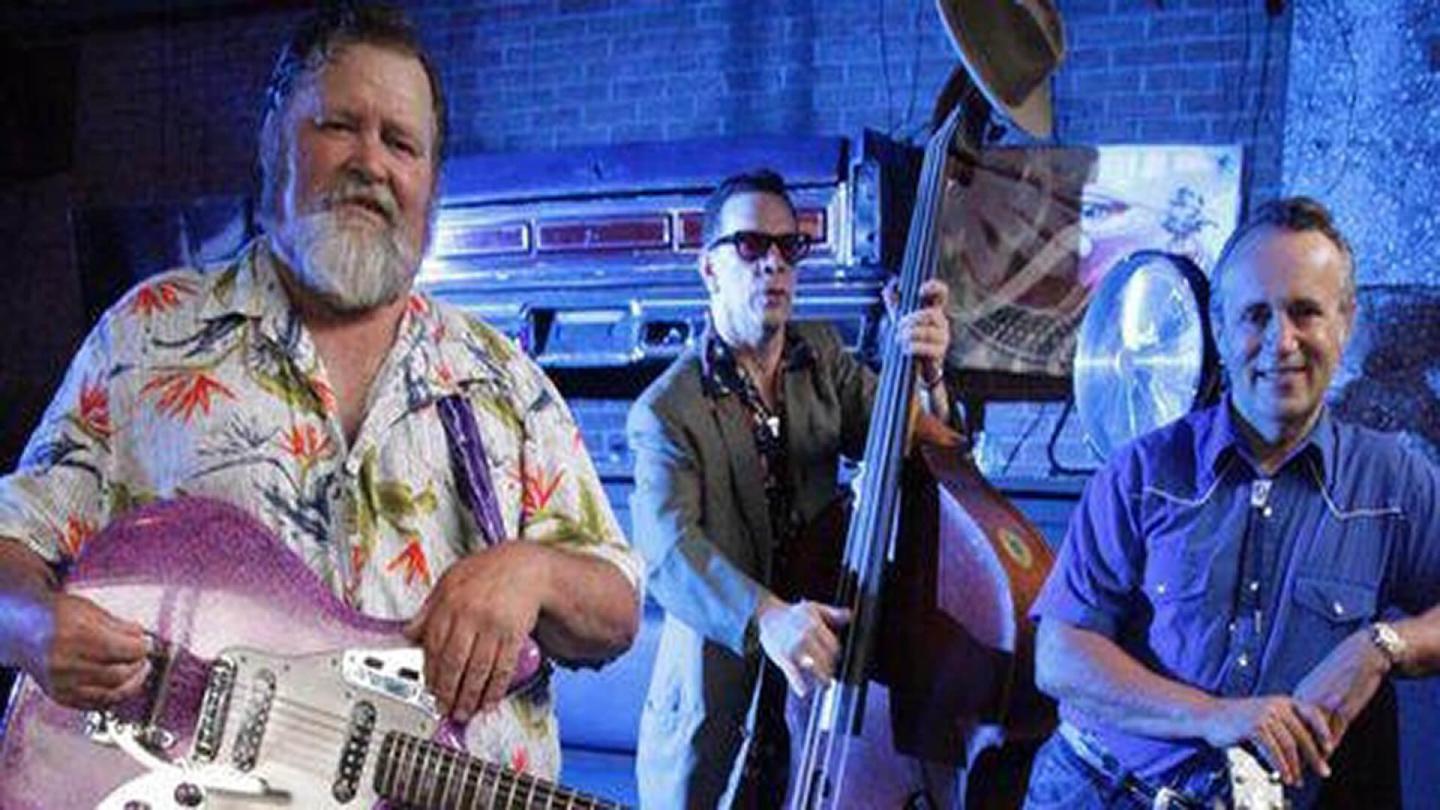 Join us on Valentine's Day at the Little Theater in Woodstock for a swinging good time as we dance to the tunes of the popular Starline Rhythm Boys!

Considered Vermont’s premier honky-tonk & rockabilly trio, The Starline Rhythm Boys were formed in 1998 (now celebrating 20+ years together!) by 3 professional musicians with a combined experience of over 100 years in various bands (including Danny Coane with The Throbulators,  Al Lemery with Badge and Billy Bratcher’s big-time one year stint in 1997 with Wayne "The Train" Hancock).  The Boys are a full time, heavily booked drummer-less "Tennessee-style Trio", consisting of Danny Coane ("Little Danny C") on acoustic rhythm guitar, “Big” Al Lemery on electric lead guitar and Billy (“Slappin’ Billy B”) Bratcher on acoustic upright "slap" bass, in the style of Elvis', Cash's and Perkins' early bands. They perform  vintage country, honky-tonk and rockabilly with strong instrumental work and very tight, powerful country harmony duet vocals.  Their repertoire consists of many superb originals, mainly written by Bratcher, as well as great covers of both classic and obscure numbers.  One of Vermont’s most popular and hardest working bands, at over 100 gigs a year just in-state, The Starline Rhythm Boys are a unique original group with outstanding, real-deal sound, style, energy, stage presence and appearance.  They have appeared at almost every type of venue, as well as on radio and TV, and are both a listening and highly danceable group who appeal to a wide age range.

The Starline Rhythm Boys were signed artists to Cow Island Music, a small, independent "Americana" label, as well as Coles Meadow Music Publishing, both based in Northampton, MA from 2008  until 2018, when the recording & publishing ceased operations. Through Cow Island and their own previous self-produced label, Tin Town, the Boys have released seven recordings, three of which won “#1 Album of the Year” (2002, 2007 and 2009 respectively) on the Freeform American Roots (FAR) chart based in Austin, TX.  The Starline Rhythm Boys have won Seven Days newspaper’s (Burlington, VT)  2015 and 2016 “Daysie” awards as “Best Americana Artist/Group” and then “Best Country Artist/Group” for 2017 and 2018. They were also nominated, along with 4 other groups from Texas, Colorado, Nashville & Sweden, in the “Best Honky Tonk Group” category for the 2016 Ameripolitan Music Awards, Austin, TX.

The Starline Rhythm Boys have been  labeled “Vermont’s House Band” by Vermont Magazine and as Diane Scolaro, former Executive Director of the Onion River Arts Council (Montpelier, VT) and long-time music booker/promoter, said in May, 2017:  “I’ve booked hundreds of bands in the past 25 years and seen many more than that. You guys are consistently the most talented, entertaining, engaging and fun band out there.  It is clear that you have played together a long time and love what you do.  It is always a joy to catch your show!!”.

Original, unique and “real-deal,” The Boys say, “Accept No Imitations!”