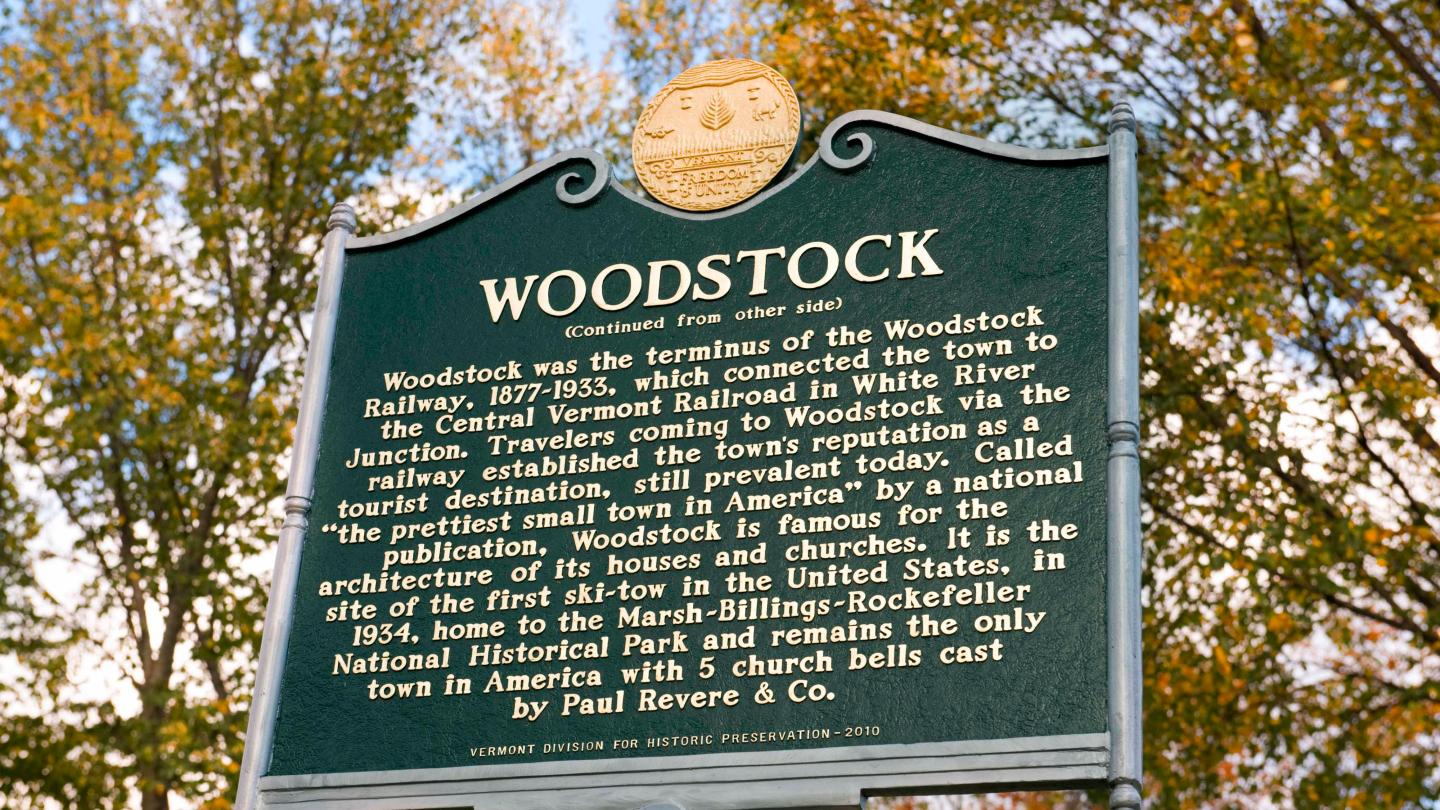 From The Blog Welcome to Wonderful Woodstock

Welcome to the wonderful town of Woodstock, Vermont - a special place not only to visit, but to live, work and raise a family. From the stand-out features of the Woodstock school system, to success stories of residents working for and building businesses near and far, this blog will show how living in Woodstock can be not just a dream, but an achievable reality.

Here you will find stories highlighting local creatives, entrepreneurs and business owners, from transplants to multi- generational Vermonters - those that bring this town and community to life. We will also feature events, news and activities you won’t want to miss. This will be a celebration of everything Woodstock has to offer - its quintessential New England small town charm, its vibrant culture, its amazing community, its enchanting connection to nature, and its picturesque scenery. We hope you enjoy.

For those of you new to the Town, we’ll start by sharing with you an overview of Woodstock that provides highlights and a brief look at its history. For a continual update on events, great stories, and images from around Town, make sure to follow @WoodstockVT on Instagram.

Thanks for reading - we’re excited you stopped by! We look forward to sharing all that Woodstock has to offer and hope what has captured our hearts and imaginations here in Woodstock, will capture yours as well.

The “prettiest small town in America,” Woodstock is the idyllic town you’ve dreamed of, whether as a vacation spot that provides something fun for everyone, or as the perfect place to start a business, work remotely or raise a family. It is the quintessential New England village, with a quaint main street home to galleries, general stores, boutiques and restaurants. Its beautifully-preserved Federal homes and buildings set the stage for its stunning setting, many of which were lovingly preserved by the Rockefellers and Frederick Billings, some of the town’s most influential benefactors.

Businesses in Woodstock are nearly all locally-owned, which means its residents are truly invested in maintaining the town’s many attractions for new neighbors and tourists alike. Visit for the local cuisine, bucolic beauty, local ski areas and golf courses and the thriving arts community. But, stay and live here for the welcoming community, outstanding school system, and the homes whose prices are a pleasant surprise to anyone hailing from local metro areas.

Woodstock is just a short drive from major metro areas, including Boston (3 hours) and New York City (5 hours). Visitors can take I93 to I89 North to Vermont, and Woodstock is just 10 miles off of the interstate.

3,048 (2010 census), which includes the towns of South Woodstock, Taftsville and Woodstock.

Whether you’re an executive for a major corporation, you own a business serving clients nationally like Wild Apple Graphics, or you start a local restaurant like the owners of Mangalista, Woodstock is the perfect place to work, live and raise a family. Learn more about relocating here to raise your family or start your business here.

Billings Farm and Museum: The land and farmhouse were owned by Laurance Rockefeller and his wife Mary French Rockefeller. The farm and museum include an operating dairy farm and a restored 1890 farm house. Get to know the farm through interactive programs and activities, and experience first-hand sampling of actual farm work, animals, and agricultural processes.

Sugarbush Farm: Sugarbush Farm is famous for its excellent waxed cheeses and Pure Vermont Maple Syrup made on its hillside farm. Learn about maple syrup making with a sugar house tour, walk the nature trail to see the sugar maple trees, and get up close with the farm animals.

Marsh-Billings-Rockefeller National Historical Park: The only U.S. national park in Vermont, the park preserves the site where Frederick Billings established a managed forest and a progressive dairy farm. The name honors Billings and the other owners of the property: George Perkins Marsh, Mary Montagu Billings French, Laurance Rockefeller, and Mary French Rockefeller.

Mount Tom and the Pogue Trail: Hiking in Woodstock is abundant! The Pogue Trail is a 5+ mile loop trail accessible from Woodstock, perfect for hiking, trail running, and snowshoeing.

Suicide Six Ski Area: Woodstock was the site of the first ski tow in the U.S. and its history with skiing is evident in its local ski mountain. Suicide Six has easy-riding terrain perfect for families and beginners, and welcomes skiers and snowboarders of all abilities. It’s also home to the first National Snow Snurfing contest in 1982 and was one of the country’s earliest ski resorts to allow the sport that would become snowboarding.

Woodstock Farmers’ Market: The Farmers' Market is a year round venue for the freshest local food. From take-out prepared dinners and lunches, milk and eggs, fresh organic produce, fresh meats, and everything in between.

Woodstock boasts a variety of lodging options that are open year-round, from cozy inns like the Jackson House Inn and Lincoln Inn and Restaurant at the Covered Bridge, to grand hotels including the Woodstock Inn and Resort. Learn more at www.woodstockvt.com/lodging.

Visitors and residents in Woodstock can enjoy dining experiences ranging from casual at the Worthy Kitchen, to fine dining at the Lincoln Inn and Restaurant at the Covered Bridge. A fairly comprehensive listing can be found here.

Woodstock, Vermont was chartered by New Hampshire Royal Governor Benning Wentworth on July 10, 1761. It was named the Shire Town of Windsor County in 1766 and quickly became a prosperous manufacturing and commercial center. Woodstock was the terminus of the Woodstock Railway, 1877-1933, which connected the town to the Central Vermont Railroad in White River Junction. Travelers coming to Woodstock via the railway established the town's reputation as a tourist destination. The town has been home to George Perkins Marsh, environmentalist; Frederick Billings, railroad empire builder; Senator Jacob Collamer, advisor to President Abraham Lincoln; and Laurance Rockefeller, conservationist and philanthropist. It was the birthplace of Hiram Powers, noted sculptor of "Greek Slave". From 1826 to 1856, it hosted one of only six medical colleges in New England, the Vermont Medical College. It remains the only town in America with six church bells cast by Paul Revere & Co.

We use the information you supply us in different ways. We use your survey responses and feedback email to help us improve the content and experience offered to our Web users. We also use your contact information to interact with you (if that was your intention).

We will save your contact information to occasionally update you on new offerings about our website. If you sign up for our newsletter we will add your name to the subscription list for our e-newsletter, which we send out monthly. You can remove your name from this list by following the instructions in the newsletter text or by clicking on the unsubscribe icon in the e-newsletter. If you request a brochure from Woodstock , you have the option to also receive other offers from Woodstock. We will not send you mailings or e-mails unless you approve it.

As you browse woodstockvt.com, advertising cookies will be placed on your computer so that we can understand what you are interested in. Our display advertising partner, Ad Agency, then enables us to present you with retargeting advertising on other sites based on your previous interaction with gostowe.com. The techniques our partners employ do not collect personal information such as yourname, email address, postal address or telephone number. You can visit this page to opt out of Ad Agency and their partners’ targeted advertising.

For information you provide us, we will not rent or share your contact information outside of the Woodstock Areas Chamber of Commerce without your permission, with one exception: when you enter a contest on our website we offer it to the establishment(s) that provides the contest prize.

Every two weeks between September 21, 2022 and February 28, 2023, the Town of Woodstock, Vermont, will randomly select a single winner of this giveaway; either a one-night stay at the Woodstock Inn & Resort (exclusions apply), or a one-night stay at the Blue Horse Inn (exclusions apply). The winner will be notified within 24 hours of the drawing by email to confirm their prize, and to provide information regarding redemption.

Exclusions; Please note that the one-night stay is subject to booking availability, blackout dates, and other restrictions.